Mike and I toured Castle & Key, one of the newest and oldest distilleries along Kentucky’s Bourbon Trail on a cool, crisp morning in October 2018. This was the month of the grand re-opening of what was originally known as “the birthplace of bourbon tourism.”

When you walk onto this gorgeous property located in Woodford County barely three miles up the road from Woodford Reserve Distillery, you know immediately that you’re about to get a magnificent history lesson on Kentucky bourbon, among other things.

The Architecture of Castle & Key

Immediately, the setting drew us in. The steam lifted off the water in the original “Roman bath” style springhouse. The blue skies served as a perfect backdrop for the European-inspired castle built in 1887 and recently restored.

And as we walked along the paths to the sunken garden, we could quickly see that someone had had a true vision to bring this piece of property from ruins back to glory.

The Castle of Castle & Key

While I wouldn’t say the castle is the heart of the distillery, it is where the bourbon (among other things) is distilled.

Originally built in 1887 by Colonel Edmund Haynes Taylor, Jr, the castle was inspired by European architecture on the outside, but set up as a functional distillery on the inside. And the layout of the distillery wasn’t changed in the restoration.

Side note: Colonel Taylor was a banker, a politician, and a distiller. As someone who was once a CPA (accountant) and is now a writer… When you find your creative outlet, you just have to go for it.

The Key of Castle & Key

The keyhole-shaped springhouse built by Colonel Taylor holds over 130,000 gallons of limestone filtered water, a staple in the production of Kentucky bourbon. I mean, it’s the perfect example of why it’s near-impossible to distill true bourbon anywhere else the way you can in Kentucky.

In addition to being a water source, the springhouse adds to the architectural beauty that is Castle & Key. If you don’t believe me, venture over to the Castle & Key Instagram page and explore the beautiful photos.

To appreciate the beauty of one of the newest distilleries on the Bourbon Trail, you have to understand the ruin that the property was in when the new owners took it over in 2012.

In 1920, Prohibition forced the closing of Old Taylor Distillery, and the after several owner changes, the property fell into ruin.

And the sunken garden? You couldn’t even see it after more than 40 years of neglect.

One of the things you just have to see for yourself on the tour is just how gorgeous the sunken garden is, thanks to Jon Carloftis, a Kentucky native and renowned New York rooftop designer. And to understand that the garden was completely filled in by dirt, junk, and overgrown vegetation all the way to street level, you become in awe of how gorgeous the garden is now.

The Castle & Key sunken garden is truly worthy of a European-inspired castle and a “Roman bath” style springhouse. And it’s the perfect spot for a garden wedding.

One captivating aspect of Castle & Key is that the grounds are a mix of beautifully renovated and dilapidated structures. Mike found the ruins fascinating and kept wandering off from the guided tour to explore several buildings in various states of disrepair.

But what about Castle & Key’s bourbon?

So… Castle & Key is owner of one of the longest barrel house in the world, and it’s already filled to capacity.

In addition to aging their own bourbon in charred oak barrels, Castle & Key stores other distillers’ barrels of bourbon while their inaugural batch of bourbon ages.

Of course, the question on everyone’s mind: When do we get to taste the first batch of Castle & Key bourbon?

All I can tell you is that their first batch is in the barrels. We’ll have to wait at least four years from the time the aging began before the first bottle is filled.

Until then… There’s delightful gin and vodka to drink.

I came away from Castle & Key with a lovely bottle of their Restoration Release London Dry Gin. After our trip to Ireland and the Pearse Lyons Distillery, I discovered I actually enjoyed gin. Who knew?

So, while I wait for the first taste of Castle & Key’s bourbon, I’m enjoying experimenting with their gin.

And the Castle & Key Restoration Release Vodka is lovely, as well.

The gift shop is filled with a large variety of apparel, interesting items for your home, and accessories. We actually purchased some unique Christmas gifts for our family and friends while we were there. And, of course, a bottle of gin.

A must-see along the bourbon trail

Mike and I are often asked which distillery should they tour: Woodford Reserve Distillery or Castle & Key?

First of all, the tours are only 3.3 miles  apart.

Second, I can’t choose between the two, because they’re each very different experiences.

So why choose? Do both. Tour one in the morning, have lunch at the Stave (which is located between the two distilleries and is one of my favorite casual restaurants with Kentucky-inspired food), and tour the other in the afternoon.

Seriously, there’s no reason not to tour both distilleries on the same day. 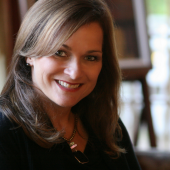 Heather is a thriller novelist, travel writer, and social media guru who splits her time between Kentucky and the rest of the world. When she's not writing, she's preparing her youngest child to flee the nest and fielding texts from her 20-year-old college student. You can learn more about Heather and the novels she writes at heathersunseri.com.

What to do In Central Kentucky in the Fall